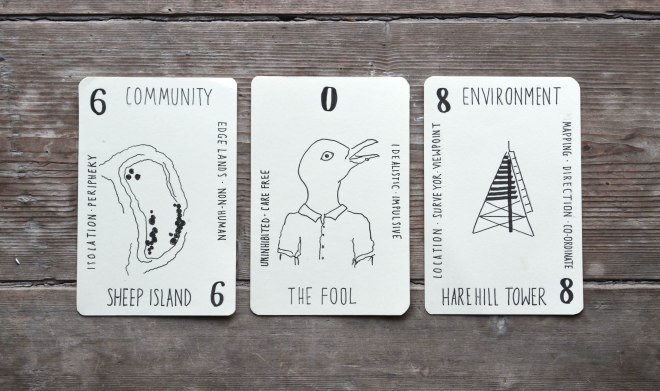 What does the future Barrow in Furness look like?

Over the course of my recent residency (not yet completed, but on hold due to the current COVID19 outbreak), this has been one of the main focuses of my activity and research. The residency looked to add additional content and conversation to Art Gene’s ongoing Extreme Views programme, which is exploring sustainability and possible futures in the town through dialogue and bringing together audiences with different view points.

One of the main focuses over my time has developed into the Barrow Tarot, a re-imagining of traditional tarot to explore fortune telling for a future town. Less individual, more collective visioning, the Barrow Tarot aspires to be a tool for expanding out conversations from the traditional spaces or sticking points that discussing the town’s future might get caught on.

As with traditional Tarot, the deck is comprised of 78 cards, divided into four ‘minor’ houses, and one ‘major’ suite but here is where most of the similarities part ways(!) Barrow Tarot includes the four houses of Industry, Community, Environment and Culture, and each of the 78 cards is represented by an important figure, place or icon within the fabric of the Barrow story, past and present.

The Tarot is designed to be used as a conversation between two people, the artist and one other to explore the deck together. It’s exploratory, and early testings have allowed me to hone in on the best way to guide the use of the cards and the conversation whilst remaining open to new ideas and inspirations. The Barrow Tarot does not give answers, but allows us to explore the possibilities with a more open mind.

Alongside the Tarot deck, of which there is currently just one hand drawn deck, is a digital collection for reference, a small series of printed decks, and a travelling field tent space in which to share Barrow Tarot readings. You can take a look and explore the digital deck online now, available on Art Gene’s website here

I’m also interested in tarocchini, a card game played in Italy using Tarot cards (their original use before the divination aspects became more popular), and whether we could create a version for the Barrow Tarot. Anyone who could share more on the playing of this, please get in touch!

I’d like to share several of my favourites from the deck (although I have a lot of favourites), alongside their meanings. Hopefully many of these will be familiar to Barrovians of all ages! 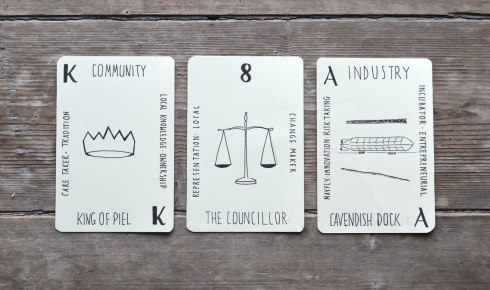 The King of Community, The King of Piel | Major 8, The Councillor | The Ace of Industry, Cavendish Dock

The King of Piel represents ideas of local knowledge and tradition. This card asks questions around ownership – both public and private, who does this place belong to? What does that ownership mean or allow for? Who makes the decisions for this place? And also centres on ideas of care taking, the responsibility we have towards our towns, environments and wider locale.

Cavendish Dock is an entrepreneur. This card suggests taking risks, being ambitious and looks for the things we can gain (economic or otherwise) in the future. The idea of incubator looks at creating a space to nurture and kickstart small ideas, a safe haven to test out and experiment, make mistakes, learn from them and grow new ideas for possible futures. 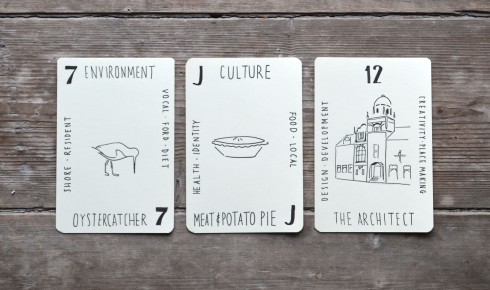 The Seven of Environment, The Oystercatcher | The Jack of Culture, The Meat & Potato Pie | Major 12, The Architect

The Oystercatcher is a resident, and always vocal in the conversation. He asks questions of the shore and coastlines of Barrow and as the population of oystercatchers is impacted by the overfishing of cockles, of the impacts and affects of decisions made to the local ecology.

The Architect is a character of place making. He approaches problems to our built and landscaped environment with creativity, and asks questions of development and design. What are the long term impacts of the proposal? How will these ideas age in the future, could they become dated or need to be upgraded and what will the impacts and costs of this be? What is the role of design and creativity in the conversation? 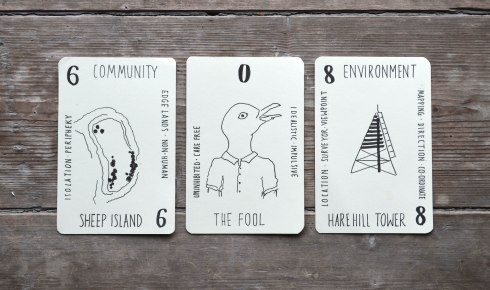 The Six of Community, Sheep Island | The Fool | The Eight of Environment, Hare Hill Tower

Sheep Island is an anomaly in the community deck, for the absence of human community. Sheep Island represents isolation, the edge lands or places on the periphery of our conversation or discussion. What are the places we are not discussing? How will nearby environments or places be impacted by our ideas? Sheep Island also stands for the non-human in the conversation, beyond the human population, have you considered the impacts on other communities, including birds, insects, marine life or mammals?

The Fool is uninhibited, and carefree, impulsive and idealistic. What would The Fool bring to the conversation? If we were to take on the traits of The Fool and act more directly, how would this impact our future scenarios? And alternatively, what offers of caution does The Fool bring?

Hare Hill Tower, is a surveyor. This card looks to ideas of mapping, direction and location. How could we map out this future vision? What tools would we need to do so? What is the role of a map or survey? What locations should we consider? 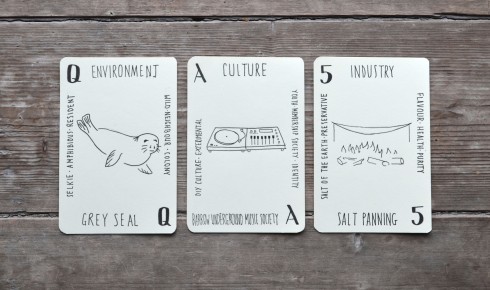 The Queen of Environment, The Grey Seal | The Ace of Culture, Barrow Underground Music Society | The Five of Industry, Salt Panning

The Grey Seal is an amphibious resident, with considerations of both marine and land environments. As one of a colony, The Grey Seal asks larger questions of our scope of community, who are our neighbours in the conversation? How are they involved? The Grey Seal also stands for the wild, untamed and feral in the discussion, and of the mystical with her connections to the legendary Selkie’s brings the possibility of transformation and change.

Salt Panning takes its direction from one of the most important materials salt – and it’s uses and importance in health, preservation, flavour and purity. This card asks us to consider our resources wisely, and to be aware of the multiple uses or potentials of an idea or material. This card speaks of great worth and reliability. Who are the important people in our conversation? Who, without would our ideas not be possible? 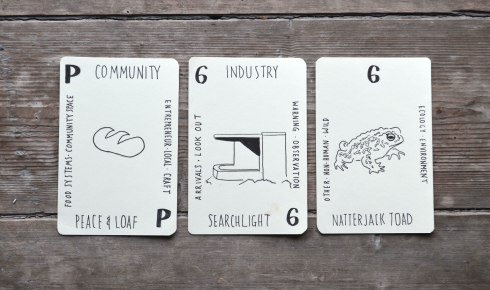 The Peace and Loaf card explores alternative food systems and networks, how will our food systems be impacted by future changes? What will our diets look like in the future? This card also champions the craft skill, the art of something made well and the local. Peace and Loaf brings ideas of entrepreneurship into the conversation and asks what the community spaces of the future will be like.

Searchlight is a look out. This cards stands for the values of observation, for outward looking (rather than inward facing) and of the potential of new arrivals. The Searchlight also throws a cautionary warning into the conversation, are there things that have not been considered?

Natterjack Toad stands for the non-human and the other in the major suite. Highlighting the importance of ecology in our local environments, and the protection and preservation of wild spaces or edge lands.

One thought on “Barrow Tarot”