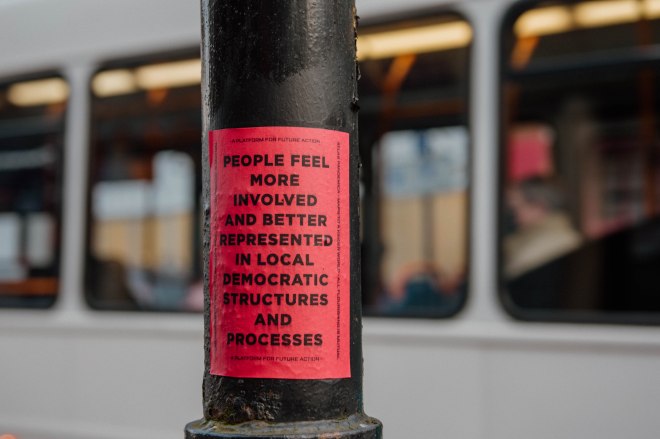 It’s been a busy month. I’ve started to notice an annual routine in my practice, which includes a quieter period of the longest stretch of Winter, before everything get’s moving again at quite a pace around March/April. It’s taken a little while to try and find a comfortable way of navigating this, not feeling overly precarious about less work and trusting that things will get moving again as the year gets going. After the past couple of chaotic years, this is the first time in a while when it seems that people, organisations and commissioners are getting a little more optimistic in their planning for the coming year and I’m hopefully joining the club on that front.

The pace really kicked off in the last week of February, with an exhibition opening down in Barrow-in-Furness with Art Gene, followed by a quick trek up to Glasgow for the first Burds of the Brush lettering meet. Since then it’s been a relatively fast paced month, predominantly working with The Stove Network and Dumfries Signwriting Squad… but plenty of plans in the works for projects outside of Dumfries and Galloway this year.

First up, some public projects with the Signwriting Squad – kicking off with the fun and cheerful design for Philip Palios of The Wobbly Shelf on English Street.

Quickly followed by our first mural, commissioned by Dumfries Music Conference for one of our favourite spots in town, The Dougie! Taking inspiration from a Nina Simone song, the mural was live painted over a weekend as part of International Women’s Day celebrations running throughout the month.

These paste ups have also been appearing around the town as part of a collection of events marking two years since the first covid lockdown in the UK, that began on the 23rd March 2020.

AS part of marking this date, the Stove hosted a series of events and activities around their Atlas Pandemica project. I was originally involved leading the Elsewhere artists as one of the Atlas Pandemica projects, and as part of this my hand-drawn map features as part of the project. This time round I was also supporting all of the events and activities taking place, see more about the week of events here The Atlases were created in a limited edition and designed by Alan Cameron, but can be found in digital form over on the Stove website.