Regular, or even occasional visitors to the Dumfries Hospital may have noticed a new addition in the ward areas in the past month. I was delighted to finally see the DGRI Collection Tables installed, following their completion by fabricators at the Glasgow Sculpture Studios (thanks Dave and Martyn). If you are about visiting an ill friend or relative, or are perhaps spending some time there yourself, have a look for the socialisation spaces in each ward, as nine of these contain one of our tables. There are also bonus points for anyone who spots the two tables out at Moffat and Stranraer community hospitals.

These are one of three commissions which I have been developing over the past two years for the new hospital, and comprises of a series of 11 coffee tables (nine of which are in the DGRI), filled with individual collections, filled with objects, found and gathered, and made specifically for the project.

For this project I have worked with students from HNC and HND art classes at the Dumfries College, and young artists as part of blueprint100’s open workshops at the Stove. Students and artists were invited to create an object that reflected ideas of health and wellbeing, that could be a positive message for someone to spot whilst spending time staying in the hospital, or that reflected their experiences in Dumfries and Galloway. The found objects are a mixture of natural materials gathered from around the region, old postcards and curiosities linked to places around the region. We then hosted casting sessions in the Dock Park and outside in the College grounds making their objects in pewter.

I was really touched by the thoughtful and considerate approach students and artists made towards the project, and the love and care each person put into their objects. The concept of giving a gift of a positive message, or moment of distraction to a stranger who might be spending extended time in the hospital struck a serious chord with many of those participating. The generosity and creativity of everyone involved was very humbling, and a treasured part of the project.

The furniture itself was designed by Dress for the Weather and made by the GSS team from a coloured MDF material valchromat, which takes on a lovely soft and tactile finish when the medical varnish, Steriguard is applied to it.

The lettering in the casing is all hand painted, a copperplate font at a miniscule 12mm letter height, and will be etched on my brain forever. 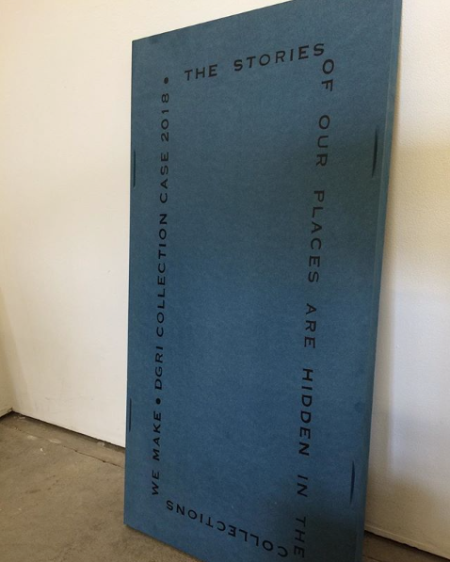 What is of real significance in projects like these however, is a more complex notion of ownership and association. Often, a little ‘community engagement’ is sought at the beginning of such large projects. ‘Could you just run a workshop with some key stakeholders to involve them in the project?’ This can be a great starting point. But the notions that this is the beginning, middle and end of ‘community’ involvement undermines the investment, and care of all of those involved. Whoever the community might be, in this case from staff and daily users, to patients, family and friends, and the wider community – almost all of whom will use these public spaces at various points in their life, to offer a tokenistic approach towards involving other people is insensitive and in the longterm, entirely un-useful to artworks.

Community engagement is not an afterthought.

For me as an artist, whenever I involve others in my work, by invitation, direct collaborative working, conversations in passing, or any other form, these people are then welcome to be a part of the ‘artist’ role, they too are invited to have a share of the ownership of the work, and to share in the journey of the works life. This is of course, not a requirement, but is open as a means of us creating a more meaningful artwork collectively.

Over 60 people contributed unique works for the DGRI collection cabinets. I hope that everyone who has contributed a piece to the collection cabinets will have the chance to seek out their own contributions within the hospital, and share their individual stories. The tables hope to be there for the foreseeable future as a record of our moment of shared collaborative practice.

Ours is a transient community. But it would be disingenuous to claim credit for anyone else within this. I’m still hoping to get some form of permanent marking to tell the stories of those involved in contributing to the project, although unfortunately I don’t have a complete list of names.

Sincere thanks to everyone who contributed to the work, without you all it wouldn’t have been the success it has become.

Special thanks to Jo Shennan, who leads the art courses at DG College. Thanks also to the blueprint100 team, and Matthew and Sophie for their support with leading the workshops, and the Stove for ongoing use of the Pedal Powered Foundry.